One of America's Premier Trial Attorneys Meets with US President, Talks Baseball 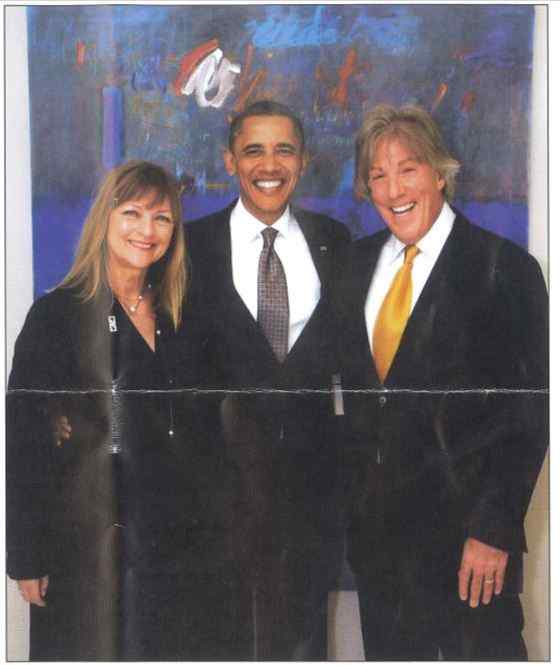 Geoffrey Fieger and his wife, Keenie, were among 47 guests privileged to meet President Barack Obama during a private dinner in April. The fund raiser, held at the Bingham Farms, home of Denise Hitch and her husband, Jim Scalici, also included Tigers great Willie Horton, former Gov. James Blanchard, and Jalen Rose, an ESPN commentator and former member of U of M's Fab 5.

"It was just a beautiful evening," said Fieger, who shook hands and had his photo taken with the president.

Guests were then seated at tables filled with gold-rimmed dishes, Waterford crystal and centerpieces of purple hydrangeas and peonies, to enjoy a meal catered by Bacco Ristorante of Southfield.

"Before Obama met any of the people at dinner, he took it upon himself to introduce himself and shake the hands of all the wait staff. I thought that was very impressive and I think they were very impressed with that too," Fieger said.

It was the second time Fieger had the chance to meet the president. The first was at a dinner in 2004 to raise money for Obama's U.S. Senate run in Illinois. It was held at Christie Hefner's house and also included Robin Williams and Stevie Wonder. Fieger said he mentioned the dinner to Obama and the two shared a laugh.

During the dinner, Fieger sat next to Willie Horton and the two talked about baseball and this year's Tigers team. Denise Hitch sent Fieger home with three official major league baseball bats for his children signed by Horton.

"Most people, I think, were a little bit intimidated about asking him to sign autographs. But my wife and I wanted him to sign three for our children and he did that kindly," Fieger said.

Geoffrey Fieger is no stranger to the limelight; as a leading trial attorney, Geoffrey has won perhaps more multimillion dollar verdicts than any practicing attorney. Beam Legal Team has happily partnered with Mr. Fieger for the past 20 years, advocating for children and bringing justice for those with birth injuries, including cerebral palsy, due to medical malpractice and negligence.

Reprinted in part with permission from "Fieger Times", Summer 2012.