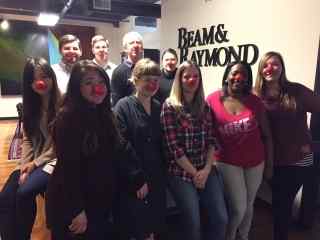 This year for Red Nose Day, Beam Legal Team is making a donation to the National Resources Defense Counsel. Of course, since the 1970’s the NRDC has been a strong legal advocate for our environment and Mother Earth, but what, someone might ask, does that have to do with child safety and health? Everything and now more than ever! In 2016 a minority of Americans managed - with Russian intervention and a flawed Democrat running for President - to take control of every lever of our country. The Republicans control all three branches of government.

And it is not the GOP of President Nixon, who actually created the Environmental Protection Agency. Rather it is a Republican Party financed by billionaires, who worship corporate profits even at the expense of clean air and fresh clean water for their own children and grandchildren. Even worse with time running out for the planet, not only for Arctic polar bears but toddlers with teddy bears, we have a Commander in Chief who proclaims climate change is a hoax, as the NRDC website reports:

Future geologists will define the Trumpocene as the period of official climate denial and presidential attempts to roll back climate action, prop up declining energy firms, stop scientific and economic research on the health of our home planet, and destroy the institutions we counted on to protect public health and welfare.

So here’s to the NRDC on Red Nose Day. Long live the children of mankind.