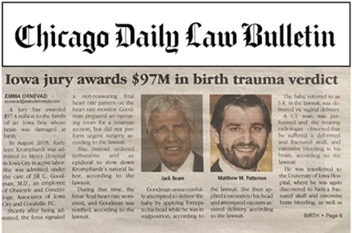 Attorney Jack Beam and Attorney Matt Patterson of Beam Legal Team, LLC in Chicago secured a $97.4 million verdict in a birth trauma lawsuit. The case unfolded in an Iowa City court, and the verdict was the largest of its kind in Iowa state history. The team of attorneys represented parents Kathleen and Andy and their baby Scotty, who suffered multiple severe, life-changing brain injuries due to the neglect of medical staff during his delivery. The multimillion-dollar verdict cannot undo the harm that Scotty and his parents have suffered, but it can help them try to live more comfortably and with greater financial security. 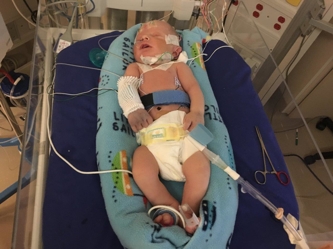 In August 2018, Kathleen and Andy went to Mercy Hospital Iowa City while Kathleen was in active labor with Scotty. The pregnancy had been normal, and Scotty was deemed healthy by obstetricians in the most recent medical evaluation.

Not long after arriving, Scotty’s fetal heart rate monitor showed concerning signs that he might soon be in fetal distress. OB/GYN Jill Goodman, M.D. had prepped the room for an urgent C-section but decided against it. Instead, Dr. Goodman administered an epidural to delay Kathleen’s labor while the doctor attended to other patients for roughly an hour. All the while, Scotty’s heart ate deteriorated until the point that he was indeed in fetal distress.

Upon noticing Scotty’s signs of fetal distress, rather than calling for Dr. Goodman or anyone else on staff for assistance, the attending nurse began to pull forcibly on the infant while instructing Kathleen to push. At no point did the nurse make a careful evaluation of Scotty’s condition to see if it was even safe to try to deliver him this way. Dr. Goodman eventually returned and decided to use forceps and then a vacuum extractor, despite it being widely accepted in medical communities that such methods during such dangerous labor would likely cause the newborn to suffer a brain injury. 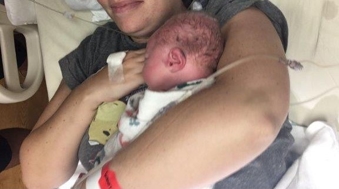 Upon being transferred to NICU, Scotty was diagnosed with:

Due to his severe brain injuries suffered at birth, Scotty has since been diagnosed with cerebral palsy (CP), developmental delay, ischemic brain injury, and mixed expressive-receptive language disorder. His life and the lives of his family have been forever changed due to the negligence of the attending medical staff and Dr. Goodman. Yet the doctor and Mercy Hospital Iowa City tried to say that all of the head and brain injuries happened in the “natural” course of labor.

Shutting Down All Defense Attempts

Unwilling to accept any liability for what happened, the defendant doctor’s practice did not offer a single penny or engage in any settlement discussion and took Kathleen, Andy, and Scotty to court. Of course, Attorneys Beam, Patterson, and Fieger were ready.

The defense relied entirely on the illogical argument that Scotty’s multiple brain injuries happened during labor and due to the forces of Kathleen’s pushes. However, expert opinion from doctors from the University of Iowa, and testimony of experts in court, clearly showed that there was no way the injuries were naturally occurring and unpreventable. Even the shape of one of Scotty’s skull fractures was the same as the forceps that Dr. Goodman dangerously used during delivery.

Faced with overwhelming evidence of medical malpractice, the jury reached the $97.4 million verdict, which Judge McKeever promptly approved. We are proud to say that Andy and Kathleen are more-than-satisfied with this award and know that it will help them provide Scotty the special needs care he will require throughout his life without putting them in financial hardships. At the end of the day, all we want to know is that a child who was wronged and harmed through negligence will get a fair chance at a happy, comfortable life.

Read more about this case here.

To learn more about Beam Legal Team, LLC in Chicago, please feel free to call us at (866) 766-3806 or contact us online. We focus entirely on complicated and catastrophic birth injury claims and lawsuits that other law firms do not have the resources or experience to handle.