A study from 2010 indicates that infants of African-American mothers may have a higher chance of being diagnosed with cerebral palsy. This increase may to be tied to their greater chances of being born underweight. 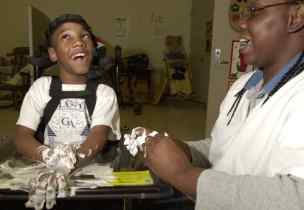 This supposition is due to the fact that when birth weight is taken out of the equation, African-Americans are actually less likely than Caucasians to be diagnosed with the motor-neurologic disorder. The reason for this disparity is unknown, says Dr. Yvonne Wu, a pediatric neurologist working at the University of California, San Francisco, who was the lead on the study.

Large population studies like this one are very useful in determining correlations between race and incidents of the different types of cerebral palsy. Dr. Nancy Murphy, a pediatrician at the University of Utah in Salt Lake City, and chair of the American Academy of Pediatrics Council on Children With Disabilities, highlights the need for more research in this area when she states:

“We need these big population studies to get at those kind of details."

There are other possible causes of the higher incidence of cerebral palsy among black mothers. Access to healthcare, especially prenatal care, can be limited in lower income areas and among specific socioeconomic groups, such as minorities and those in poverty. This study in particular states that increased availability of prenatal care might help to reduce the incidence of cerebral palsy in the African-American population. Early, and good quality prenatal care tends to lead to healthier babies; women without access to these resources tend to be at risk for traumatic deliveries.

Tremendous pressure by hospital institutions on obstetricians to reduce the number of C-sections in general, and specifically for those on Medicaid (due to the fact that hospitals tend to be paid a lower rate for expensive surgical procedures by Medicaid than by private insurance) may also be part of the problem.

Any of these conditions can lead to hypoxia-ischemia, a leading cause of cerebral palsy.

How The Study Was Conducted

For the 2010 study, which was published in the Journal of Pediatrics, Dr. Wu and her team reviewed medical records of 6.2 million births in the state of California from 1991-2000. In this population, 8,400 infants had been diagnosed with cerebral palsy, which was a rate of 1.4 cases per 1,000 live births.

2 and 2.5 cases per 1,000 live births is about the normal rate, but Wu and her team did not include children with mild cases of cerebral palsy who did not qualify for state services.

African-Americans had about a 30 percent higher chance that Caucasians to be diagnosed with cerebral palsy in this study population. Among Hispanics, the rates were about the same as Caucasians, while Asian-Americans had the lowest incidence of the condition.

Premature or underweight infants were up to 24 times more likely to be diagnosed with cerebral palsy. Both of these risk factors were much more common among African-Americans than the other groups in the population, which could be accounted for by less access to healthcare. Those who did not graduate from high school also had a higher risk.

Birth Injuries Are A Common Cause of Cerebral Palsy

Birth injuries or incidents of cerebral palsy caused by vacuum-assisted vaginal delivery, forceps, or use of Pitocin for vaginal delivery were not examined in this case study. Birth injuries are a common cause of cerebral palsy in children, accounting for, by some sources, up to 10% of all cases in the United States. If you or your child have been a victim of medical malpractice, and your child has been diagnosed with cerebral palsy, it may be a good idea to contact a Chicago birth injury attorney.